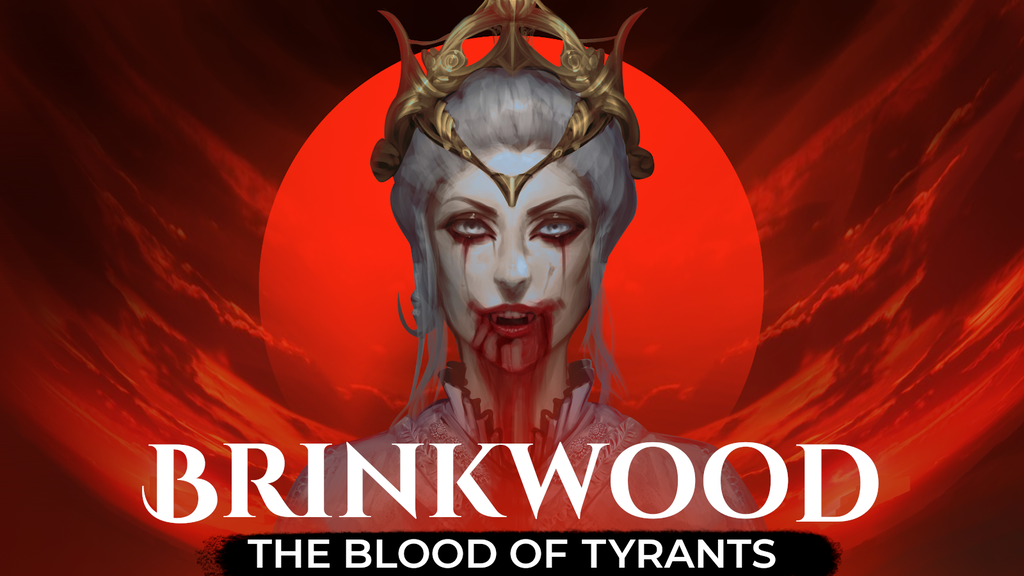 Brinkwood: The Blood of Tyrants

Welcome to the pre-order store for Brinkwood! IMPORTANT NOTE: Shipping has not yet been calculated, and WILL NOT be included in your pre-order (yet). We will be sending out a survey as well as reminders to choose your shipping option (as well as to finalized your pledge) closer to delivery.

Latest Updates from Our Project:

As we near our $20,000 "art upgrade" stretch goal, I thought I'd talk a bit about the artwork of Brinkwood and the design process we go through for each piece.

Content Warning: The rest of this update will contain references to and images of art that features blood, gore, corpses, and monstrous toothed horrors. If that doesn't feel like your scene, maybe skip this update!


First off, you might notice that much of our art features a restricted color palette, with our artists working primarily in greyscale with sharp accents of red to highlight certain elements in the image. This was a decision made early on to try and "unify" the visual aesthetic of multiple artists, as well as to present a distinct, thematic art style for Brinkwood as a whole.

For the "scene" art brought to you by Olivia Rea, we start with the germ of an idea, pitched to the team as a way to try to capture something special or unique to Brinkwood. For example...

We started with the idea to invert or subvert the common trope and visual image of a vampire sitting on a throne while sipping the blood of innocents. We knew we wanted a vampire, assassinated in their lair, with the words "Blood of Tyrants" graffiti-ed over them. We pitched it to Olivia, who took the idea and ran with it, filling in cool details such as the reflective floor, the red fletching of the arrows, the torn curtains, and the shattered furniture on the floor. These elements combine to tell a very clear, very exciting story.

When we go about designing monsters, the process starts with our narrative monster designer, O. Hybridity. O has a talent for weaving monsters together that fit both the individual aesthetics and themes of the various vampire lords, but also grounding them in the setting, military priorities, and environmental conditions of the vampires they serve and the domains they inhabit. For example, the Organist's design is particular in how they serve as an impromptu "signal corps" for vampire armies, the organ upon their back able to bellow forth commands, signals, and alarms for quite the distance. Additionally, the design fits the theming of the Countess, showing what happens to artists who do not live up to her exacting standards, and showing the literal "weight" that artists who wish to succeed in her domain (and perhaps in ours) must carry in order to simply survive under the heel of blood rent.

From there, the design is translated into a reference document, and in this case, passed on to Steph, who put her unique spin on the creation. Steph is known for the fantastic, bestial, and wide-mawed monsters she creates, and the Organist hits those marks in spades. Steph added a wide, impressive maw to the Organist's back, mimicking, at least in my view, the infamous "blood eagle" of viking lore. A special CW for blood and gore if you decide to look that term up. Furthermore, Steph really brought home the scale and size of the organ, making it an impressive, imposing feature of the final design, while adding flourishes of sinew, decorate woodwork, and bloody steel piping to bring it into congruence with the rest of the Organist's hunched, withered form. The final result is impressive indeed:

Finally, I'd be remiss if I didn't touch on the work of Myca, whose first art with us (along with additional pieces from Steph!) this upcoming stretch goal will fund. Myca came to our attention for her work in distinctive, monstrous designs that incorporated natural elements alongside the horrific, and her chimera-like mashups of straight-up nightmares. If you're curious about what's next for Brinkwood, I highly recommend perusing Myca's portfolio for a sneak peak into her style.

Whew! OK, I think that's enough monsters for now. In a future update, I'll talk more about the work of our cover artist and vampire designer, Mohamed Saad, as well as the Masks of Brinkwood and the unique icons designed for them.

See you in the forest soon, comrades!

Thanks again for all your support so far. With your word of mouth, we've managed to let more people know about Brinkwood than we ever thought possible. Please, keep doing what your doing! Sharing Brinkwood with your friends, comrades, and anyone else you think might be interested is helping us out a ton.

In this update, I wanted to bring your attention to some of our stretch goals! We've already funded our first two, so the Expanded Almanac, Lifepath Lyric Game, and Reformed Background are all set to go!

Our next goal, In the Face of Our Despair, is truly special to me. It's author, Jammi, has been a deep source of inspiration in terms of both the game design and aesthetic of Brinkwood, and has helped immensely in making Brinkwood what it is.

In addition to being a wonderful game in it's own right, In the Face of Our Despair is a tragic prequel to Brinkwood, and I think it provides a strong, dramatic foundation for more hopeful campaigns of Brinkwood to build upon.

But you don't have to take my word for it. Jammi put together a twitter thread that goes in depth on what you can expect to see in In the Face of Our Despair, as well as what new additions and expansions they have planned! Definitely worth a read!

Thanks again for your support, brigands! Keep up the good fight, and we'll see you in the forest soon!

When I first sat down to work on Brinkwood, it was as part of an itch.io jam that charged creators with making games based on myths and folklore, the appropriately titled "#FolkloreJam." But even before that, I knew it would be special to me.

The real start was the title, dreamed up by a friend of mine, Talen Lee, and a logo that captured my imagination.

That said, it wasn't until I found the community around Brinkwood when my dream started to become a reality. This is a game built by and for that community. On discord, on twitter, on reddit and in the San Jenaro CoOp, it is the combined effort and passion of so many people that make this game what it is.

So, I dedicate this game to you. The brigand. The rebel. The organizer. The worker.

And, from the bottom of my heart, I thank you.